On the one hand, there is a large body of research (pdf) that illustrates a correlation between health spending and worse (or at least not better) health outcomes. On the other hand, in JAMA, Joynt and Jha summarize another strand of work that suggests that higher spending is associated with better outcomes and greater satisfaction.

Several studies suggest that higher spending at the patient or hospital level may in fact be associated with better clinical outcomes. Data from California hospitals suggest that higher spending between 1999 and 2008 was associated with substantially lower mortality for many common medical conditions, and that this effect was robust across hospitals of different sizes and across all regions within California. [3] Similarly, 2 analyses of Medicare data—one examining surgical care, one examining intensive end-of-life care—found that hospitals with a higher “intensity” of care had better outcomes. [4,5] Other studies have also found that high-cost hospitals provide better care and have more satisfied patients than their lower-spending counterparts. [6,7]

Another paper by Stukel et al. in the same issue of JAMA reports similar positive correlations between hospital spending and health outcomes in Ontario, Candada. (See Bill Gardner for a summary.) Does higher spending lead to better care or not? Can we reconcile these two sets of seemingly contradictory results? Yes we can. Joynt and Jha write,

So, is there a contradiction between the 30 years of Dartmouth Atlas work showing an inverse relationship between cost and quality and the latest set of studies? In fact, no: the relationship between cost and quality is entirely dependent on whom and what are examined and how the money is spent. In regions of the United States where the delivery system is fragmented, the resulting care is, in aggregate, of poor quality and very high cost. At the systems level, high costs may represent spending on wasteful, inefficient, and duplicative services. Yet this appears less true for individual clinicians and health care centers.

These authors are right to point to the nature of the delivery system. Skinner, Staiger, and Fisher (pdf), as well as Baicker, Chandra, and Skinner and others hypothesize that different health systems have different health care production functions with varying degrees of efficiency. The degree of fragmentation (lack of coordination across providers and/or insurers), for example, could decrease the productive efficiency of one health system relative to another. The figure below, from a Center for Studying Health System Change paper on geographic variations in health care, shows production functions of two health systems. A study with a sample represented by the filled circles would find a negative correlation between spending and outcomes. However, a study that sampled the empty circle and the filled one on region 2's production function (perhaps at different points in time) would find a positive one. The findings are not inconsistent. They're just based on different samples of different production functions. 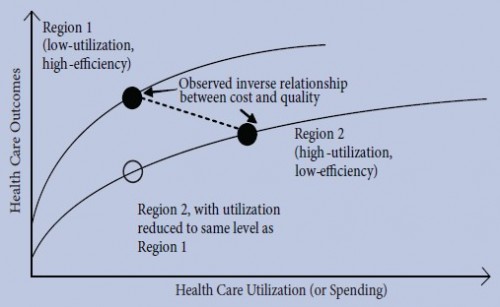 Austin Frakt is a health economist at the Department of Veterans Affairs and Boston University’s Schools of Medicine and Public Health. He blogs on health economics and policy at The Incidental Economist.

As part of our ongoing effort to raise awareness of health services research and increase its application in policy and practice, AcademyHealth has partnered with Austin Frakt, Ph.D., and Aaron Carroll, M.D., M.S., to contribute posts on the subjects of health care costs, delivery system transformation, and public and population health – areas AcademyHealth has identified as a priority in the current policy environment. As regular contributors, they’ll be discussing current events with an eye toward how new and existing research informs the issues.

The holes in EMTALA

The promise and perils of health IT