Much has been made about the relationship between hospital readmission rates and mortality. Dead people can’t be readmitted, suggesting a negative correlation. On the other hand, decreases in both seem to be measures of quality, suggesting a positive correlation. Harlan Krumholz and colleagues published a JAMA article last month that examines the correlation between risk-adjusted, 30-day readmission rates and mortality rates, both calculated on a fee-for-service Medicare cohort using CMS’s methodology. In particular, they examined patients discharged with a diagnosis of heart failure (HF), acute myocardial infarction (AMI), or pneumonia (PN). Correlations were not statistically significantly different from zero between mortality and readmission rates for the AMI and PN disease cohorts. For the HF cohort, the correlation point estimate was -0.17. Wanna see it? 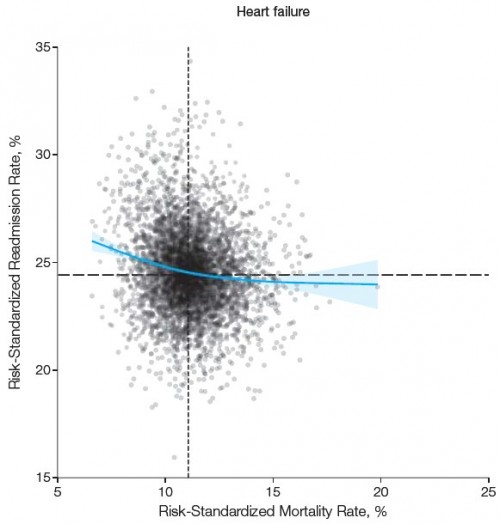 From a policy perspective, the independence of the measures is important. A strong inverse relationship might have implied that institutions would need to choose which measure to address. Our findings indicate that many institutions do well on mortality and readmission and that performance on one does not dictate performance on the other.

Ashish Jha has another perspective. A quote doesn’t do justice to his argument, but here’s the key passage:

Ashish goes on to suggest readmission rates can still play a helpful role in motivating hospitals and health systems to improve. Maybe! I worry that they can also be gamed. Since they’re hardly correlated with mortality, we may not easily detect when they are.   --Austin
Blog comments are restricted to AcademyHealth members only. To add comments, please sign-in.

To stent or not to stent? That is the question. But only the first of many.