Whether it's painkillers or heroin, we're still in an opioid epidemic | AcademyHealth Skip to main content
Posted Feb 05, 2015 By The Incidental Economist
TIE
Share

Use and abuse of opioid medications and attendant problems have grown tremendously since the late 1990s or so, fueling a quadrupling of deaths from opioid pain relievers between 1999 and 2010. Well aware of the growing problem, state governments and federal agencies have attempted a range of remedies. A recent, NEJM-published study by Richard Dart and colleagues offers evidence that they may have helped, in a way, but may have also encouraged a shift from painkiller use to heroin.

Attempts to address the opioid painkiller abuse epidemic are numerous. Some examples include:

Many other state laws regulating access to and dispensing of opioid painkillers are found at this CDC page.

Perhaps the increased attention to the opioid problem is penetrating clinical practice. Catherine Hwang and colleagues published results in JAMA Internal Medicine of a survey of 420 primary care physicians, examining their attitudes and perceptions of use and abuse of prescription drugs. The vast majority (85-90%) reported that drug abuse is a "big" or "moderate" problem and that opioids are over-prescribed. Yet, nearly half said they were prescribing them less than one year ago.

Richard Dart and colleagues used the collection of data sources that comprise the Researched Abuse, Diversion, and Addiction-Related Surveillance (RADARS) System to assess use and abuse of opioid painkillers from January 2002 through December 2013. They also obtained measures of heroin use from the National Poison Data System and the National Survey on Drug Use and Health, prescription volume from IMS Health, and population data from the 2000 and 2010 U.S. Census. 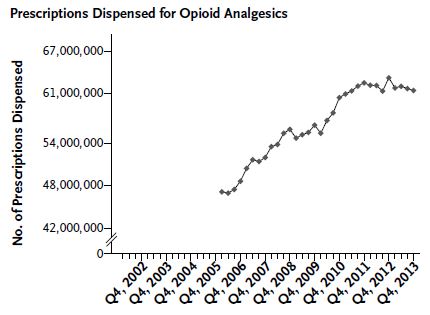 One notable exception to the trend suggested in the chart above is from the College Survey Program. The authors' analysis of that data set found that the rate of nonmedical opioid painkiller use increased from 0.14 per 100,000 college students in 2008 to 0.35 by the end of 2013.

As prescriptions for opioid painkillers have leveled off, heroin use has increased. For example, data from the National Poison Data System show that the rate of heroin use accelerated in late 2010. At the same time, abuse of extended-release OxyContin decreased. Other data sources included in the RADARS are consistent with these findings, with the notable exception of the College Survey Program. 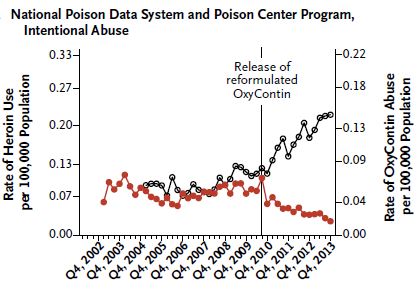 The forgoing evidence suggests that policy interventions may have had their intended impact, though we can't prove that. The authors wrote, for instance, that "studies show that the introduction of a less desirable formulation of oxycodone can rapidly decrease demand for that formulation." At the same time, they may have encouraged substitution of heroin for opioid painkillers, which certainly is not their intent. "[I]t seems likely that the reformulation of extended-release oxycodone in 2010 has contributed to the increase in reported heroin use," the authors wrote.

Whether it's heroin or painkillers, we're still in the midst of an opioid epidemic. Policy interventions may be helping, but the myriad sources for opioids, as well as accommodations for appropriate use, complicates efforts to address the problems they create.

Austin B. Frakt, PhD, is a health economist with the Department of Veterans Affairs and an associate professor at Boston University’s School of Medicine and School of Public Health. He blogs about health economics and policy at The Incidental Economist and tweets at @afrakt. The views expressed in this post are that of the author and do not necessarily reflect the position of the Department of Veterans Affairs or Boston University.