Several states — including Colorado, Vermont, Oregon, Minnesota, and others — have accountable care organization (ACO) programs for their Medicaid populations. Massachusetts will soon join this list, thanks to the federal government's recent approval of the state's proposed Medicaid 1115 waiver. What are the key features of their planned ACO program, and how does it fit into the state's broader health care policy efforts?

Because I live and work in Massachusetts, I care more about these questions than I otherwise might. But, in case you don't live or work in the state, there's another reason to care. Massachusetts is unique among states* with the lowest uninsurance rate and highest per capita health care spending. As such, it's a bellwether for (some) other states that may approach universal coverage under health reform and then more squarely focus their attention on cost control. Moreover, Medicaid cost control is a perennial issue in most states, so Massachusetts' challenges, if not its experience, is somewhat generalizable.

For context, the chart below is from a 2014 Massachusetts Health Policy Commission report. It shows that between 2004 and 2014, state spending on health care rose 21% in constant dollars. This figure includes Medicaid — known as MassHealth — but also other state health care programs and liabilities. As state spending for health care grew, that for other services fell 7%. The implication is that health care is eating up resources for other important government services including those devoted to mental health, education, human services, law and public safety, and state aid to local communities. (Spending on public health and infrastructure grew.) I imagine other states have seen similar trends. 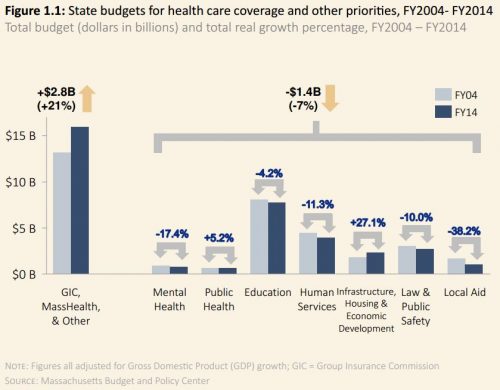 MassHealth spending and the state's share of it have both grown rapidly in recent years — about 8-12% annually — as shown in the following chart from the state's Department of Health and Human Services. MassHealth is the single largest expenditure in the Massachusetts budget, costing about $15B per year, or 40% of the state's budget. It covers 1.8 million individuals, or 25% of the state's residents, including 40% of the state's children and half of those with disabilities. 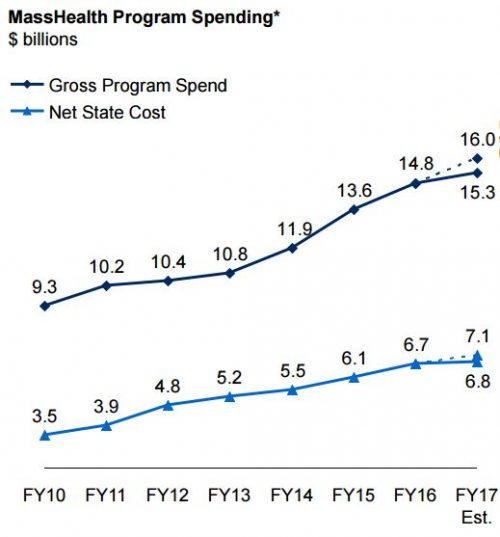 It's no wonder, therefore, that policymakers seek greater health care cost control. And, as I'm sure most readers of this blog know, ACOs are the latest hot trend in efforts to do so. They're provider organizations responsible for the cost and quality of care of a defined population. Though designs vary, typically ACOs receive bonuses for reducing spending and increasing quality (one-sided risk — all upside, no downside). In some models, organizations that spend above a pre-defined benchmark can be penalized (two-sided risk).

Under the newly approved 1115 waiver, beginning mid-2017, the state would incentivize the formation of ACOs with payment linked to performance metrics. Federal funding for the program is contingent on reduced spending growth (chart bel0w). The new authority authorizes $52.4B in spending over five years under the waiver, including $29.2 billion from the federal government. 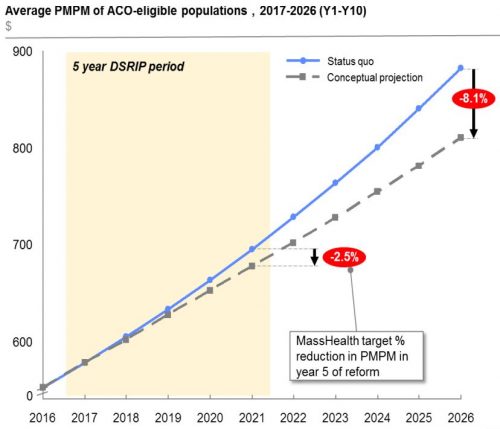 An emphasis of the 1115 waiver is to integrate care for people with behavioral health needs, substance use disorders, long-term care needs, or requiring health-related social services. ACOs will be incentivized to provide these kinds of service. Beneficiaries will be encouraged to enroll a MassHealth ACO (or a managed care plan) by reducing benefits available in other kinds of plans.

There will be several kinds of MassHealth ACOs. Those integrated with a managed care organization (MCO) will be fully at risk for costs (capitation). Stand-alone ACOs could enter a two-sided risk model with MassHealth or a non-affiliated MCO, but won't be fully capitated.

Will the MassHealth ACO effort save money? Early results from other states are promising. However, assessing savings is tricky — it depends crucially on the counterfactual. How much would the state have spent in the absence of the program?

Another important question is: Is saving money the right metric? We have an obsession with making our (per person) cheapest health care financing program that cares for the most vulnerable populations — Medicaid — even cheaper instead of focusing on making it better. The MassHealth ACO effort is intended to do both. If it succeeds, other states may seek similar waivers for their Medicaid programs.

* If one includes the District of Columbia then Massachusetts cannot boast both the lowest uninsurance rate (DC's is about tied) and highest per capita spending (DC's is larger).

We know antibiotics are overused. We're doing too little about it.

Vaccines are a public health good