It probably won't come as a surprise to you that traditional Medicare (TM) pays lower health care prices than commercial market insurers. We've known this for quite some time. A significant issue, however, is whether lower TM rates lead (or could lead) to reduced access to care for Medicare beneficiaries.

Jacob Wallace and Zirui Song took up the issue in a Health Affairs paper published last year. They examined health care price and utilization of outpatient imaging and outpatient surgical procedures across the 65-year divide — when most people become eligible for Medicare. Their data included just over 200,000 individuals captured in Truven Health Analytics’ 2007–2013 Medicare and Commercial Claims and Encounters database with broad-network, commercial market insurance before age 65 and TM from age 65 onward.

As shown in the chart just below, unadjusted, per beneficiary, quarterly spending trends for outpatient imaging and procedures are about the same before and after Medicare eligibility, but there is a large discontinuity when Medicare eligibility begins. In the last quarter before age 65, spending for a privately insured patient is about $119. At age 65, on Medicare, that drops 25% to about $89. After adjusting for age, quarter, year, and individual fixed effects, the relative change upon Medicare eligibility is even larger: 32%. 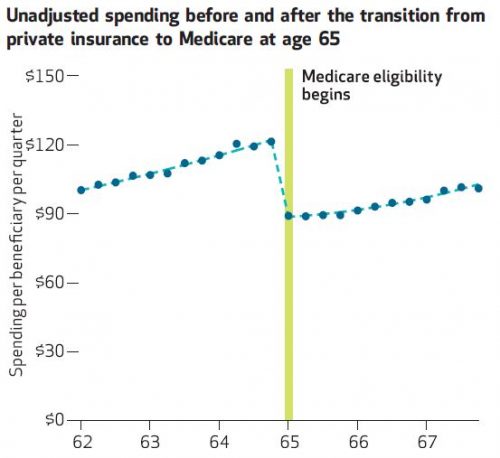 The authors found that the adjusted, relative spending drop at age 65 was larger for imaging (40%) than procedures (14%), though there is heterogeneity among specific types of each. For example, the difference for respiratory procedures was 32% but for cataract removal it was only 2%.

Spending, of course, has both price and volume components. Can you guess which one contributes more to the discontinuity at age 65? It ain't volume. I'm not even going to bother with the statistics. Just look at the chart below. And, rest assured, the "no volume change" finding holds up after statistical adjustments, with the exception of cataract surgery (big volume increase at age 65) and dermatological procedures (5% volume decline at age 65). 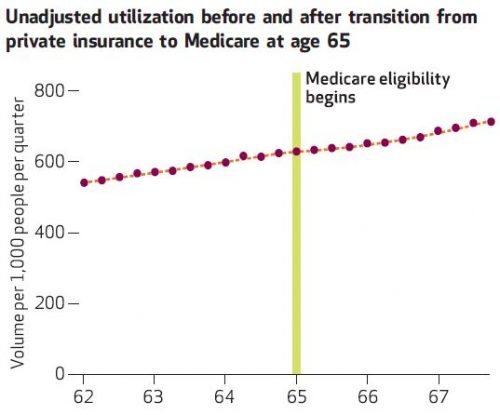 OK, so if it's not volume, it's gotta be price. And indeed, the following chat shows just that. Average price drops 29% in adjusted analysis, nearly fully explaining the spending decline discussed above. And, as you'd expect, it's greater for imaging that procedures, lining up with the spending results. 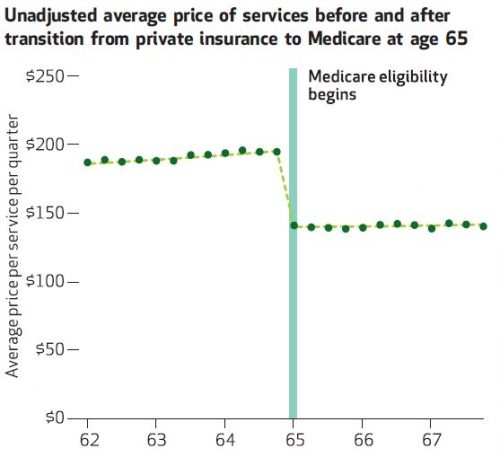 So, even though Medicare's prices are substantially below commercial market prices, there's no evidence of a change in volume. This suggests that Medicare's lower prices are not depressing access.

Not yet, anyway. Medicare's prices are scheduled to drop further, due to provisions of the Affordable Care Act and the Medicare Access and CHIP Reauthorization Act. A lot further. Here, for example, is the CMS's Office of the Actuary projection of prices for physician services for Medicare (and Medicaid) relative to those of private health insurance. 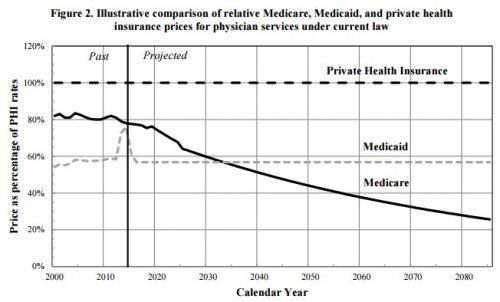 What does this chart tell us about access? Well, access is already a concern for Medicaid, at least in some areas and for some specialties. Granted, access problems are not as dire as some claim — if you measure it from enrollees' perspective — but it is a significant issue for Medicaid. If Medicare's prices fall below Medicaid's by the mid 2030s, as projected, we might expect at least comparable access issues for Medicare beneficiaries as exist for Medicaid's.

It's heartening to know that access does not appear to be an issue for Medicare today, at least according to the work by Wallace and Song. But we should keep an eye on it with similar studies as Medicare prices drop.

So what did the Medicaid expansion actually do?

The longest-term benefits from Medicaid are still worthwhile