Beneficiaries' experience in Medicare Advantage (MA) — better than traditional Medicare (TM) or not? — is a longstanding topic of debate. Though some evidence suggests MA offers superior quality and greater efficiency than TM, I frequently hear concerns that MA does not serve more vulnerable beneficiaries well.

Two recent papers provide some evidence that this may be the case. Publishing in Health Services Research, Steven Martino and colleagues found that, compared to beneficiaries without depressive symptoms, those with depressive symptoms reported worse health plan experience in MA relative to TM. And, publishing in Health Affairs, Momotazur Rahman and colleagues found that beneficiaries with acute hospitalizations, nursing home or home health care were more likely to switch out of MA and into TM than vice versa.

One major difference between MA and TM that can affect beneficiary experience is that most plans in the former establish networks, effectively putting some providers out of financial reach for many enrollees. A recent GAO report found weak standards for and oversight of MA plans' provider network adequacy. It's possible, therefore, that MA provider networks may afford inadequate access to certain types of care — like mental health — without regulators knowing the extent of the problem.

Steven Martino and colleagues consider, specifically, the 16% or so of beneficiaries with symptoms of depression. Using 2010 Consumer Assessment of Healthcare Providers and Systems (CAHPS) data, they compared the experience of over 130,000 TM beneficiaries and over 220,000 MA enrollees for those with and without symptoms of depression. Outcomes captured different aspects of patients' experiences with providers and plans. The authors assessed depressive symptoms with a validated approach based on responses to two questions about degree of interest/pleasure in doing things and feeling down, depressed, or hopeless. Analyses controlled for age, education, Medicaid (dual eligible) status, assistance with or proxy for survey, self-rated physical health, number of doctor visits and drugs used in six months, whether respondent has had a medical condition for three or more months, needs help with personal care or routine activities, and Centers for Medicare and Medicaid geographic regions.

However, they did find statistically significant different differences among other assessments of plan experiences. Relative to those in TM, those in MA with depressive symptoms reported worse plan and drug coverage ratings, more difficulty getting needed care and drugs, and worse customer service, relative to patients without depressive symptoms. The sizes of the differences were about 1-2 percentage points, close to the 2-3 percentage points of the standard deviation of quality scores in general, implying that they're meaningfully large.

These findings raise the question of whether MA plans are the best match for patients with depression. The authors note that those with depression may also have poorer health literacy, making it difficult to navigate the additional steps that managed care often imposes to receive treatment (referrals, step therapy, utilization review, pre-approval).

Momotazur Rahman and colleagues also contrast MA with TM, but for different populations: those with acute hospitalization, home health (HH), or short- or long-stay nursing home (NH) utilization.* For these patients, they estimated rates of switching between the two arms of Medicare from 2010 to 2011, controlling for age, sex, race, and state fixed effects. If one assumes all (or most) of that switching is voluntary — which presumes MA enrollees whose plan exits the market can find a comparable MA plan — then a difference in switching rates may reflect differences in satisfaction or quality between MA and TM. 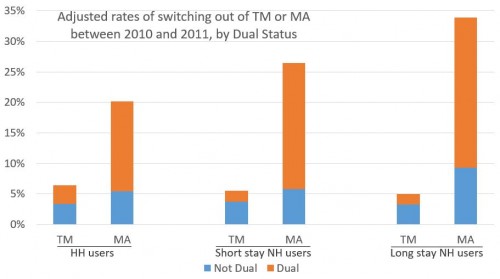 Clearly, for those with a hospitalization, HH, or NH use, MA is a much less attractive option, particularly for dual eligibles. That could be due to utilization restrictions (narrow networks, referral requirements, and the like). It could also be the case that MA promotes more, appropriately efficient use of some of these services, compared to TM. (At some times and places, TM has suffered rampant home health fraud, for example). Beneficiaries need not like that — so they choose to switch out — but that doesn't mean there isn't worthwhile management of care going on.

Indeed, in an NBER working paper, Mark Duggan, Jonathan Gruber, Boris Vabson found evidence of this by exploiting a natural experiment in New York state, where some counties lost all their MA plans. (This has happened in many more counties throughout the country, which the authors also exploit. But for New York, they had inpatient hospital billing records for all beneficiaries, including those in MA, something they did not have nationally.) In brief, they found that MA beneficiaries forced to switch to TM had a dramatic increase in hospital use (65% higher; see chart below) with no increase in quality, including no decrease in readmissions or mortality. This suggests that MA promotes more efficient care. (See also the recent work by Katherine Baicker and Jacob Robbins.) 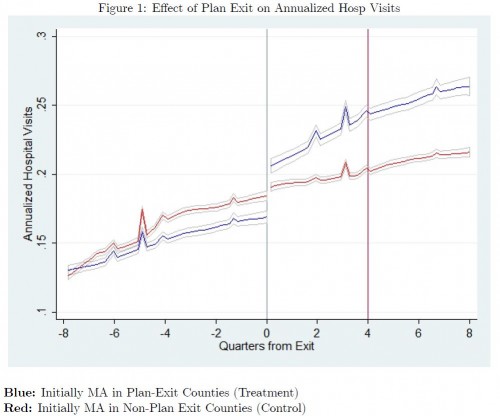 Recent policy developments could make MA more attractive. Regulations that limit cost sharing in MA for home health and nursing home care, effective January 2011, could have increased enrollees access to those services. Efforts are underway to pilot and test models to coordinate care for Medicare-Medicaid duals enrolled in private plans, which could help them access the services they need, including those with depression and other vulnerable populations.

Ultimately, however, we should not expect any plan or plan type, to be ideal for all patients. After all, any beneficiary who (thoughtfully) chooses TM — whether alongside a supplemental plan or not — can reasonably say she is not as well served by MA, even if it is more efficient. And, despite MA's growth, TM is still considerably more popular.

* Long-stay nursing home use is distinguished from short-stay by the presence of a 90-day Minimum Data Set (MDS) assessment.

** For the chart, duals are those who became dual eligible between February 2010 and January 2011.

Austin B. Frakt, PhD, is a health economist with the Department of Veterans Affairs, an Associate Professor at Boston University’s School of Medicine and School of Public Health, and a Visiting Associate Professor with the Department of Health Policy and Management at the Harvard T.H. Chan School of Public Health. He blogs about health economics and policy at The Incidental Economist and tweets at @afrakt. The views expressed in this post are that of the author and do not necessarily reflect the position of the Department of Veterans Affairs, Boston University, or Harvard University.

Moving away from fee-for-service. What can we learn from private insurers?

A solution to a nearly ubiquitous problem with risk adjustment