This Summer, The Lancet published two consecutive articles offering further evidence on the link between adult health and childhood trauma, such as with adverse childhood experiences (ACEs) or childhood hospitalization for self-harm or interpersonal violence.  Responding to the articles by Hughes and Webb, Grant’s commentary, “Childhood trauma: psychiatry’s greatest public health challenge?,” calls out the tension between (1) the strength of the evidence linking ACEs to adult physical and mental health, alcohol and substance abuse, interpersonal violence and sexual and other health risk behaviors and (2) concrete knowledge and methods for how to prevent and address the neurobiological and psychosocial impact of ACEs and childhood trauma in clinical practice, public health and in policy.

A landmark special issue of Academic Pediatrics, Childhood Well-Being and Adverse Childhood Experiences (sponsored by the Robert Wood Johnson Foundation), addresses this tension with a focus on children’s health services. The issue’s 15 commentaries and 13 research papers, along with 2 technical appendices on measurement and interventions, collectively illustrate the need for what the late Clyde Hertzman, MD called an “era of experimentation”—and era where we innovate to leverage our knowledge on the central role of safe, stable, nurturing relationships (SSNRs) to healthy child development and human flourishing across life. Such an effort would draw on the substantial, yet largely untranslated evidence on methods to proactively promote healthy parenting and relationships, foster positive health and flourishing, prevent and mitigate the neurobiological and psychosocial impact of ACEs, and treat complex trauma among children, youth and families through individual, family and community-based interventions. Taken together, the evidence points to what I call a “new integrated science of thriving” and a robust “We Are the Medicine” approach.

The journal issue and national agenda was set into motion in 2013 when the first-ever population wide findings from the 2011-12 National Survey of Children’s Health were released, revealing the high exposure of U.S. children and youth to ACEs (nearly half of all children) and three-quarters of those with emotional, mental or behavioral health conditions, like ADHD.  These foundation setting epidemiologic research efforts were used to engage stakeholders about our readiness to address ACEs at a population level, and documented population-based associations between children’s exposure to ACEs and childhood chronic illness, school and social functioning, resilience and overall flourishing (Figure 1); all of which impact the future well-being of our society. 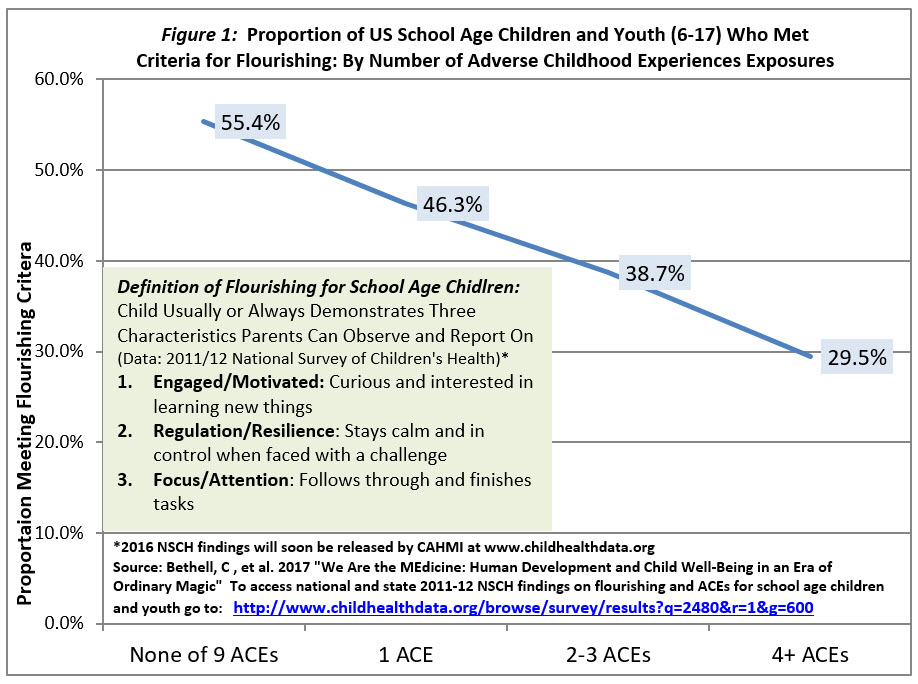 While Grant’s Lancet commentary is correct to point out the gap between the evidence and its translation into practice and policy, the commentaries and papers featured in the special issue of Academic Pediatrics conclude that we know enough to act now to  support child, youth, family and community flourishing in the face of adversity.

Among other findings, the issue highlights common factors that promote positive health and those that prevent and heal the trauma associated with ACEs, including:

Positive relationships with service providers, within medical home based care teams and among community partners were emphasized as pivotal to the success of efforts to address ACEs and promote flourishing, especially to integrate mental and behavioral health into clinical care. Related to this, a critical and common theme called out across several papers was the need for providers and leaders to develop their own self-awareness about ACEs and engage in active self-care in order to offer a healing presence and authentically engage children, youth and families to discuss ACEs and promote flourishing.  What I have called this “Your Being, Their Well-Being” mandate is something to begin now.

While there is work to do, this issue demonstrates ways we can begin to take widespread action to translate the evidence on promoting nurturance and teaching resilience,  advancing trauma informed approaches in clinical care, and building community collaborations.  We can fast track learning in many ways, including by establishing a direct link to the public citizen science capacity that will build real time knowledge on what works for whom; as I and my co-authors summarized in our report of the national agenda developed over the course of many months, in collaboration with experts from across the spectrum of child and family health, and presented for the first time in this special issue of Academic Pediatrics.

We are living in a time when our sciences of human development and thriving, our epidemic of psychosocial and mental health threats and substance abuse, and our policies to promote whole population well-being are converging to make a focus on promoting early and lifelong health of children an inescapable priority in the U.S.  I believe that traversing the era of experimentation needed to prevent and mitigate the impact of ACEs and proactively promoting flourishing can invigorate our all too often flailing efforts to improve America’s health care system; and, in turn, put our focus where it belongs--on the health and well-being of the children and youth who make up our future.

NOTE: Publication of this journal issue of Academic Pediatrics is occurring at the same time as the early release of selected findings from the 2016 National Survey of Children’s Health. Early results show variations in system performance and health of women, children and youth by ACEs and flourishing status of children. More extensive findings from the 2016 NSCH will released in the fall (www.childhealthdata.org). Access national and your states child flourishing and ACEs data here.