In this blog post, we estimate that over 1 million AANHPI gained health insurance coverage through 2016 under ACA implementation. Notably, these coverage gains applied not only to AANHPI overall but also to their major subgroups. Documenting this progress adds timely data regarding AANHPI health, which has been sparse to date, especially compared to other major racial/ethnic groups.

We recently published a study that tracked health insurance percentage reductions for AANHPI and their subgroups. By applying these findings to population totals, we estimate that the ACA’s implementation was associated with health insurance coverage expansion for over 1 million AANHPI, including an estimated 181,000 Chinese, 167,000 Other Asian, 147,000 Asian Indian, 147,000 Vietnamese, and 116,000 Korean – 5 subgroups that gained the most (Table).  Moreover, we found that large gains in coverage occurred for all major AANHPI subgroups with compression of coverage disparities between subgroups (Figure).

Source: Authors’ analysis of the American Community Survey, using 2016 population totals and adjusted estimates of the percentage-point change in coverage. 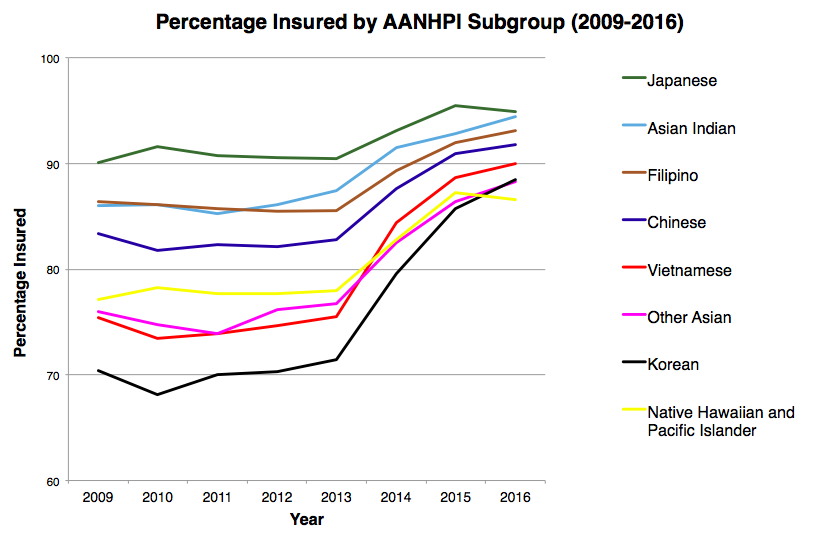 These results provide important evidence of population-level changes in coverage disparities under the ACA. Granular, disaggregated estimates like these can facilitate efforts to address health disparities for specific subgroups. Important differences in health-related outcomes between AANHPI subgroups are hidden when considered together as a single group. Similar challenges exist in other populations, where pan-racial or pan-ethnic classifications (such as “Latino”), often belie large within-group differences.

It is rare for policies to eliminate racial/ethnic disparities. In that context, the virtual elimination of the disparity in health insurance coverage between AANHPI and Whites that existed prior to the ACA represents a notable development. Reaching the AANHPI population to gain health insurance coverage has always represented a special challenge, given its notable heterogeneity with respect to culture, language, nativity, English-speaking ability and other factors. Of note, Action for Health Justice (AHJ), a coalition (established 2013) of more than 70 AANHPI organizations provided multilingual information and assistance to hundreds of thousands of AANHPI in efforts to improve health insurance enrollment across 22 states. Leading organizations in AHJ include the Asian & Pacific Islander American Health Forum, the Association of Asian Pacific Community Health Organizations, Asian Americans Advancing Justice-AAJC, and Asian Americans Advancing Justice - Los Angeles. Their community efforts, coupled with a large national policy change, may have contributed to the improved coverage outcomes noted here, but further studies are needed to determine exactly where and how such gains were achieved.

Meanwhile, continuing policy uncertainty over the ACA since 2016 has cast doubt over the future of the law’s coverage gains. While the ACA has helped to narrow insurance gaps among AANHPI subgroups thus far, ongoing monitoring and analysis of coverage and related racial/ethnic disparities are critical. Future research should explore whether coverage gains continue beyond 2016, for major racial/ethnic groups as well as the nation at large.

The Future of Health Care for Military Personnel and Veterans