More than 60 million people ages 65 and older and younger adults with long-term disabilities rely on Medicare for their health insurance coverage. Under Medicare’s current structure, beneficiaries are responsible for monthly premiums and cost-sharing requirements for their coverage, and incur costs for services not covered by Medicare. Policymakers and presidential candidates are discussing proposals to expand health insurance coverage through public programs modeled on Medicare. Some have also proposed policies to improve coverage and lower out-of-pocket costs for people covered by the current Medicare program. The attention to Medicare-for-all and other public option proposals has brought the current Medicare program back into focus—including the gaps in covered benefits and ongoing affordability challenges for people with Medicare. To examine out-of-pocket spending among people with Medicare, we analyzed the most current public data at the time of our analysis (from 2016) on out-of-pocket health care spending, using the nationally-representative Medicare Current Beneficiary Survey (MCBS).

How much do Medicare beneficiaries spend out of pocket on health expenses, including premiums, cost sharing for Medicare-covered services, and services not covered by Medicare?

Our analysis finds that the average person covered under traditional Medicare paid $5,460 out of their own pocket for health care in 2016 (Figure 1). This average includes spending by community residents and beneficiaries residing in long-term care facilities (5% of all beneficiaries in traditional Medicare). Among community residents alone, average out-of-pocket spending on premiums and health care services was $4,519 in 2016. 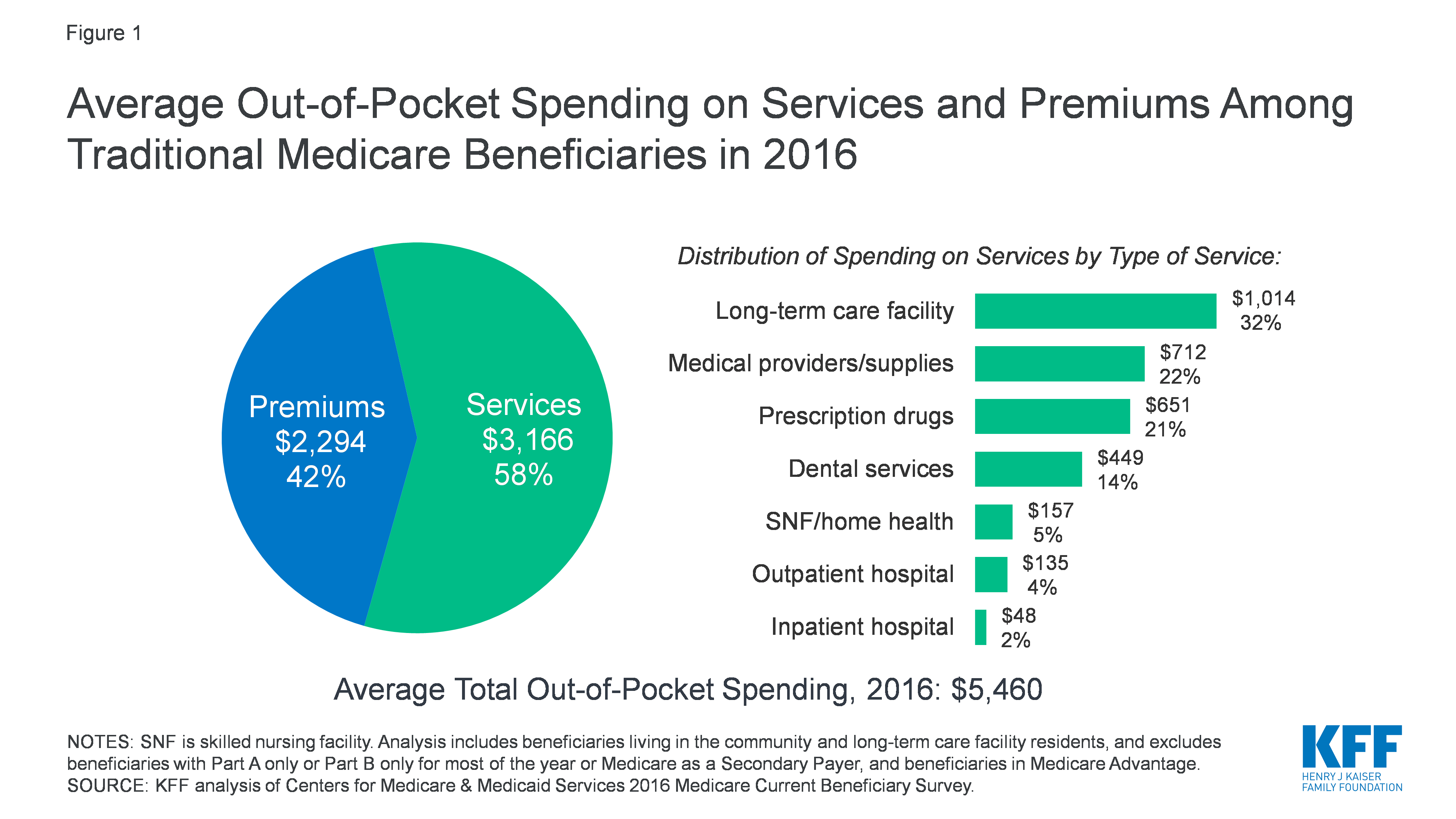 Of total out-of-pocket spending, we find that beneficiaries spent more than half (58%) on health-related services ($3,166), and the remainder (42%) on premiums for Medicare and other types of supplemental insurance ($2,294). Long-term care facility services (LTC) was the largest single component (32%) of Medicare beneficiaries’ total average per capita spending on health-related services in 2016, followed by medical providers and supplies (22%), prescription drugs (21%), and dental services (14%). Both LTC facility services and dental services are not Medicare-covered benefits, and accounted for nearly half (46%) of the total average per capita spending on health-related services among those in traditional Medicare. This LTC estimate is averaged across all traditional Medicare beneficiaries including those who used LTC services as well as those who did not; average spending on LTC facility services among LTC users is much higher than the average presented here (see our study Appendix for additional estimates).

Some beneficiaries spend substantially more than others. For example, women in traditional Medicare spent significantly more out-of-pocket than men in 2016 ($5,748 versus $5,104). Additionally, the oldest people with Medicare, ages 85 and older, spent more than twice as much out of pocket as beneficiaries between the ages of 65 and 74 ($10,307 versus $5,021). This difference was primarily due to significantly higher spending on LTC facility services among beneficiaries in the oldest age group. Our analysis finds that people with Medicare in poorer self-reported health, multiple chronic conditions, and beneficiaries who have been hospitalized also had significantly higher out-of-pocket spending than those in better health.

What share of income do Medicare beneficiaries spend on out-of-pocket health care costs?

Out-of-pocket spending as a share of income is an important measure to consider, given that many people with Medicare live on limited or fixed incomes. In 2016, half of all Medicare beneficiaries had incomes below $26,200 and half had savings below $74,450 per person. We find that half of all traditional Medicare beneficiaries spent at least 12 percent of their income on health care in 2016, with the financial burden falling disproportionately on lower-income, older, and sicker beneficiaries (Figure 2). 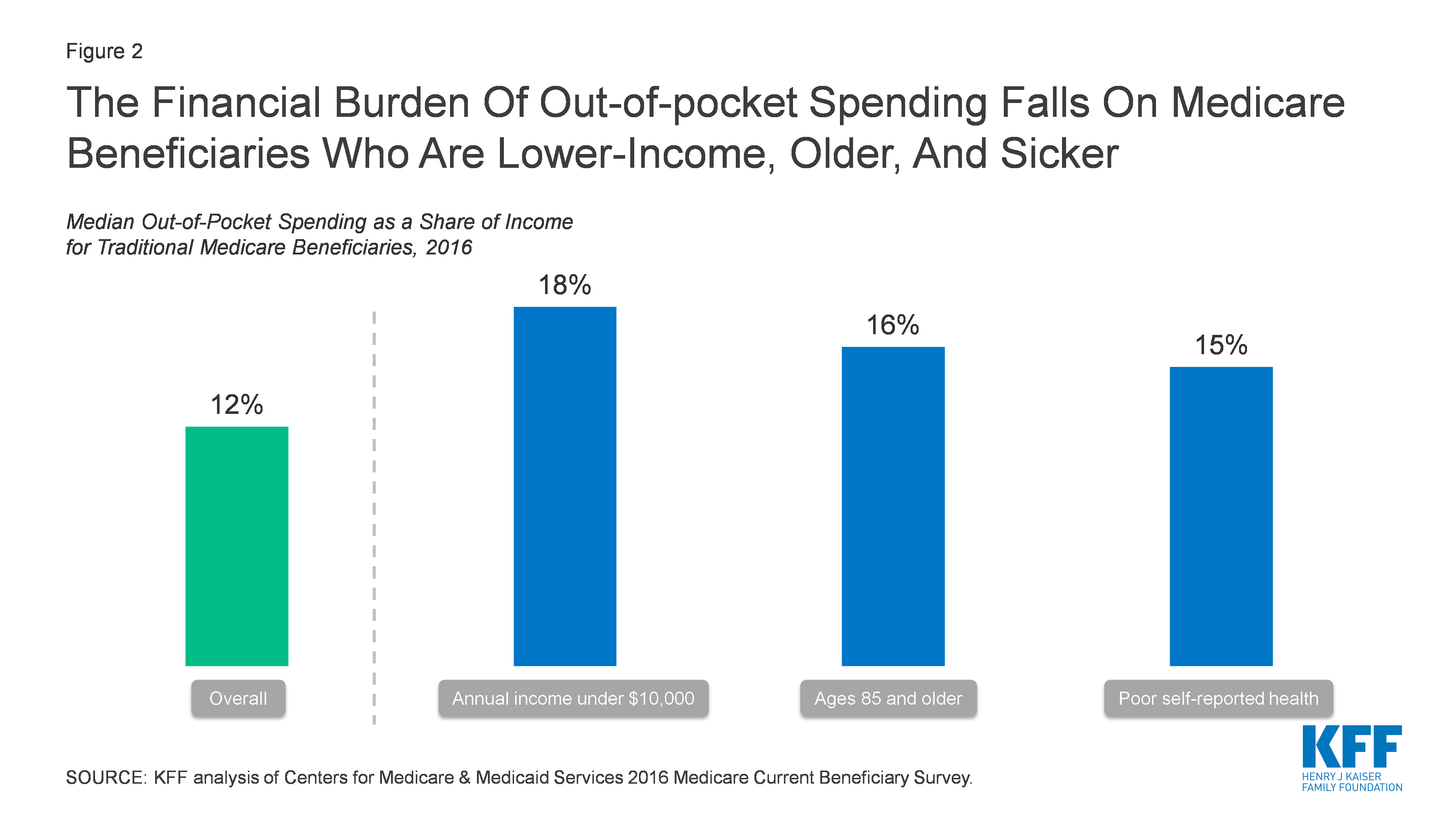 Medicare provides important financial protections for 60 million beneficiaries, but many face high out-of-pocket costs for care they receive, including costs for services that are not covered by Medicare, like LTC services or dental services. Traditional Medicare also does not have an annual out-of-pocket limit. Together, these factors limit the financial security that Medicare provides, particularly for people with significant health and long-term care needs and limited incomes. Presidential candidates and policymakers continue to discuss proposals modeled off of the current Medicare program, while others are promoting more targeted policies to lower costs by enhancing benefits covered by Medicare. Our analysis suggests that there are substantial affordability problems facing people with Medicare that are worth considering as discussions about Medicare-for-all and health reform move towards the 2020 election.

The Future of Health Care for Military Personnel and Veterans