Just because a teen does not have a diagnosed mental disorder does not mean that the teen is flourishing psychologically, socially, and emotionally. A new report produced by AcademyHealth and ACT for Health, Advancing Teen Flourishing: Moving Policy Upstream, identifies expert recommendations across a variety of domains. The report, supported by Well Being Trust, finds that half of America’s 25 million teens are either languishing or only moderately mentally healthy and one out of three teens is so sad and hopeless that they cannot participate in usual activities. Most crucially, the report provides an evidence-informed foundation for refocusing the nation’s approach to adolescence “from eye roll to opportunity…”

An evidence review for Advancing Teen Flourishing identified promising social-environmental strategies for teen well-being such as family income supplementation, moving to better neighborhoods (for some teens), and changes in school start times. Other promising actions outlined in the review relate to engaging teens in nature, physical exercise, social media, and stress-reduction activities.

In addition to the evidence review, the report’s action items were informed by interviews with key informants (including teens) and a global scan of policy recommendations. The National Expert Panel (NEP) selected and prioritized recommendations with the best evidence and most relevancy to U.S. teens’ needs. Among the top NEP priorities for the U.S. are calls to change attitudes towards teens, broaden ideas about the scope of mental health, and eliminate society-wide structural inequities--racism, sexism, and homophobia.

The report also identifies priorities for the systems of caring that touch the lives of teens. For example, experts recommend that educators emphasize well-being to the same extent as academics, while health care providers and other adults need to build capacity to work with teens. Our experts also urge the criminal justice and child welfare systems to expand their range of essential outcomes to include teens’ own sense of well-being. All stakeholders should engage with social media companies and their clients to make digital life safer and more productive for teens. The report concludes that teens would benefit if their families had more material resources as well as guidance about effectively raising teens. And, of course, changing attitudes towards teens means engaging them as leaders in policymaking that affects them. 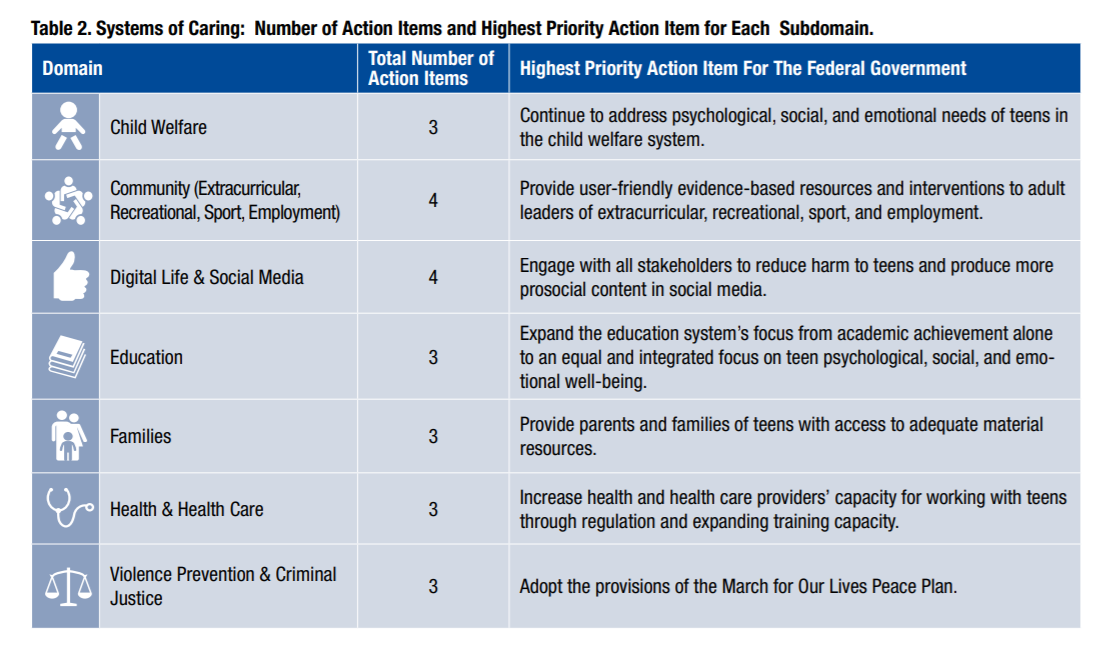 Given that the nation has long underinvested in teens, more resources will be needed to take some strategies from promising to proven, including assessing how they work across the diversity of U.S. teens. New public-private funding models are worth exploring. Implementing a Decade for Teen Flourishing could ensure a focus on investments for teens. Applying emerging findings from adolescent brain science, and employing evidence-based attitudes toward teens and their mental health, may help build even better strategies.

A Burning Platform and Trust: Key Ingredients for Payment Reform