As part of an annual, systematic survey of American mayors, the Menino Survey of Mayors, our team at Boston University asked mayors about the key health challenges of their communities as well the health issues for which constituents hold them accountable. We then analyzed mayoral attitudes in the context of current municipal-level health metrics. Our findings were released in June in our new report, Mayors & the Health of Cities, supported by Citi and The Rockefeller Foundation. Here's what we found:

Mayors see obesity and other chronic diseases, opioids, and access to care as the leading health challenges facing their community. Issues related to obesity were the most commonly cited challenge, with 25% of mayors referencing obesity, diabetes or heart disease. A similar percentage referenced addiction, with most citing the opioid crisis as their greatest area of concern. 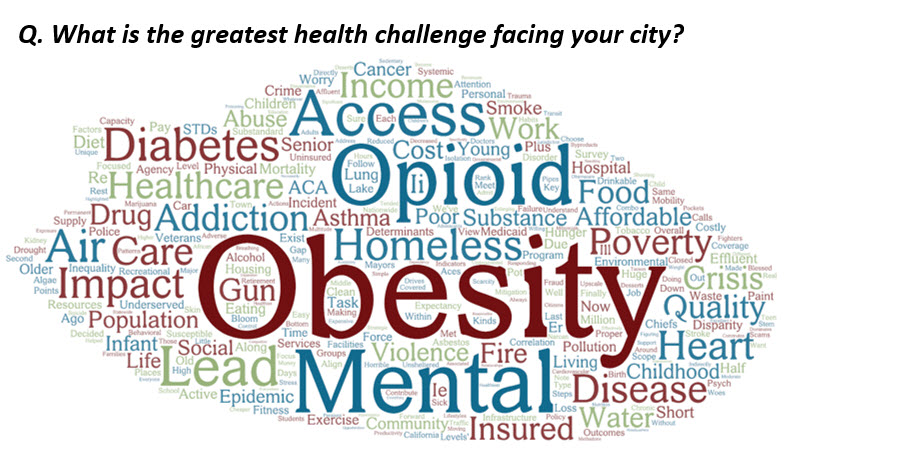 Mayors believe constituents hold them accountable for a very different set of issues, with traffic crashes, gun violence, and lead and other toxicants topping the list. In response to a close-ended question, nearly three quarters of mayors cited traffic accidents as the health issue for which they are held most accountable, while a little over half cited gun violence and a similar number referenced lead and other toxicants. Obesity emerged as the issue for which they feel they are held least accountable.

The prevalence of a particular health challenge in a city predicted mayoral perceptions of accountability in opioid-related deaths, but no other outcomes. The higher the rate of opioid overdose deaths a particular community experienced, the more likely mayors of those cities are to believe their residents are looking to them for action. We examined a range of additional health concerns, from the rate of traffic fatalities to the rate of obesity, but determined that the local prevalence of these issues was not associated with mayors’ perceptions of accountability.

How might the public health community influence mayoral attitudes and actions?

Research Insights: The Economics of Prevention

Early Glimpses of the Learning Healthcare System: The Potential Impact of Health IT

Sep 28, 2016
With support from the Robert Wood Johnson Foundation, AcademyHealth led the Payment Reform for Population Health initiative to examine the opportunities through which the payment system can support population health.