Integrated delivery systems (IDSs) are vertically integrated health service networks that include physicians, hospitals, post-acute services, and sometimes offer health insurance. In short, within a single organization, they provide a broad spectrum of coordinated inpatient and outpatient care. Kaiser Permanente is the quintessential example, but there are many other IDSs.

It has long been claimed that the greater care coordination provided by IDSs improve quality and outcomes at lower cost, in large part from elimination of duplication and unnecessary or avoidable care. A larger organization might, for example, streamline and consolidate common needs such as information technology and human resources, reducing costs. An integrated organization might more successfully implement quality improvement programs or might more frequently deliver the right kind of care, in the right setting, at the right time, improving outcomes.

[T]here is little evidence that integrating hospital and physician care has helped to promote quality or reduce costs. Indeed, there is growing evidence that hospital-physician integration has raised physician costs, hospital prices and per capita medical care spending. Similarly, hospital integration into health plan operations and capitated contracting was not associated either with clinical efficiency (e.g. shorter lengths of stay) or financial efficiency (e.g. lower charges per admission).

Their literature review included a 2006 study by Cuellar and Gertler that examined the effect of hospital-physician integration on costs, quality, and prices, using data from three states in the mid- to late-1990s. Overall, they found that integration does not reduce costs, but it increases prices by about 6%, with small improvements in quality. Integrated, large, nonprofit teaching hospitals, however, did not have higher prices and provided higher quality of care than non-integrated hospitals and other kinds of integrated ones. Working with Medicare data and also examining the mid- to late-1990s, Madison found that hospitals that employ physicians are associated with more procedures and higher expenditures, with no appreciable effect on outcomes.

Hwang et al. conducted a systematic review of literature published between 2000 and 2011 on the effects of various kinds of physician integration on cost and quality. Only two peer-reviewed studies reviewed pertain to IDSs as defined here and compared their performance to non-IDS care.* Rittenhouse et al. found that hospital- or plan-owned physician practices were more likely to use evidence-based care. Similarly, Shortell et al. found that hospital or health plan affiliated medical groups were more likely to better manage care.

Carlin, Dowd, and Feldman examined changes in quality associated with two hospital acquisitions of three multispecialty clinics in the Minneapolis–St. Paul area. They found small improvements in cancer screening and appropriateness of ED use but also increased probability of ambulatory care sensitive hospital admissions when the acquisition disrupted prior physician-hospital admitting relationships. 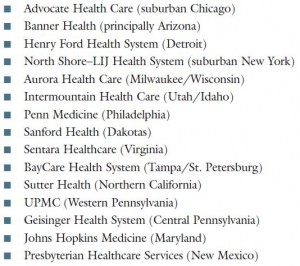 Among their analyses was a comparison of each of the IDN's flagship hospital to its main in-market competitor. They found that flagship hospitals with no revenue at risk (meaning fully reimbursed for all costs) have 8% lower Medicare per case costs than their competitors. Those with revenue at risk (e.g., sponsor their own health plan, are capitated, or subject to a two-sided ACO model) are 20% more costly than competitors. They found no meaningful differences in clinical quality or safety scores for IDN flagship hospitals, relative to competitors, but the vast majority of IDN flagships had a higher case-mix adjusted cost per case and spent more on end-of-life care.

Why do IDNs fail to consistently reduce costs and spending and only intermittently or marginally improve quality? One explanation is that a larger and more diverse organization is more difficult to manage.

Related to this explanation is that IDN formation is only a structural change. It doesn't necessarily, by itself, make a positive impact on processes of care that would be necessary to consistently improve outcomes and efficiency. Another explanation is that IDNs may command greater market power and use it to increase prices in the commercial market. If it's perceived to be a "must have" organization in plans' networks, it may not need to work as hard on quality either. An NBER working paper by Baker, Bundorf, and Kessler found that patients who see a hospital-owned physician are more likely to visit high-cost, low-quality hospitals.

The trend is for greater integration between hospitals and physician practices. Prior work on IDNs does not provide confidence that this trend will produce better outcomes at lower costs.

*Hwang et al.'s definition of an IDS includes multi-specialty physician group practices that are not hospital owned whereas, this post defines an IDS as integration between physicians and hospitals.

Health Care Reform is Far From Over